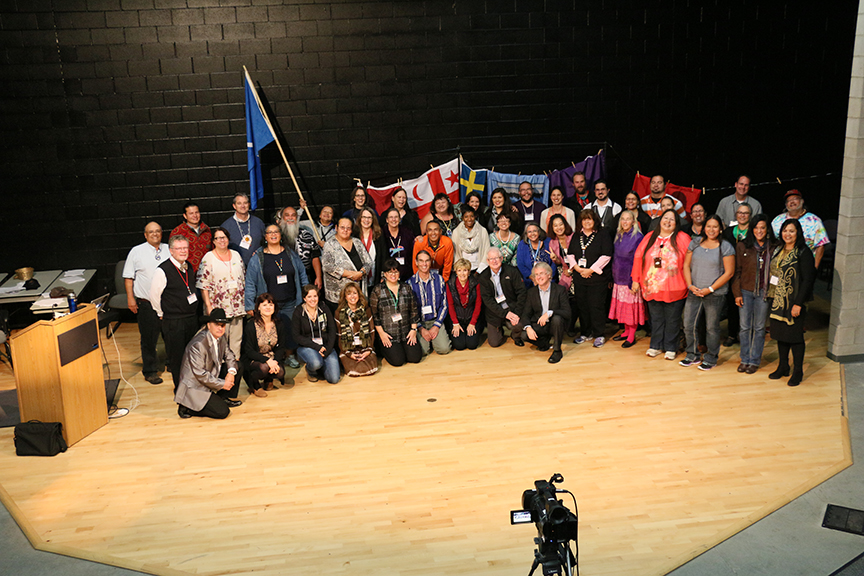 Participants who were able to stay through the very end of the last session on Saturday evening pose for a group photo after the closing round dance. Over 200 people attended the two-day meeting. Photo by Frank Tyro.

Marsha Small speaks to the 2014 AIRA meeting about her work at the Chemawa Cemetary.

“I would like to thank the AIRA team for creating a learning space to share our Indigenous Methodologies.  It is a one of a kind experience. You have shared terminology to fit what my heart and mind were trying to say in my academic journey.  I come home wanting to be there again. Immediately.” — Marsha F. Small, Northern Cheyenne, Masters Candidate in Native American Studies at Montana State Bozeman. 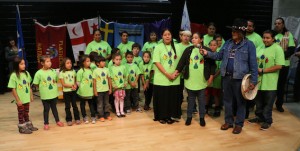 Children and leaders from the Nwkusum Immersion School opened the meeting with songs, smiles, and giggles that delighted everyone in attendance. It was great to hear such young people already speaking their Native language with such facility. 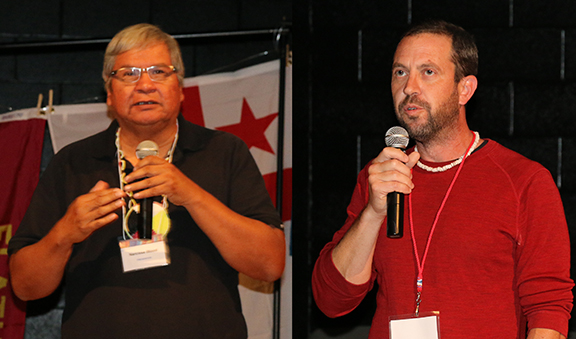 Ryan Heavy Head and Narcisse Blood teamed up to lead off with a discussion of their Learning From Place project at Red Crow Community College on the Kainai Nation reserve in Southern Alberta. They demonstrated that looking at nature – and also human records of nature — through a specifically place-based Indigenous lens allows powerful new levels of knowledge and learning to emerge. And in showing us this, they set a standard for the rest of the meeting. 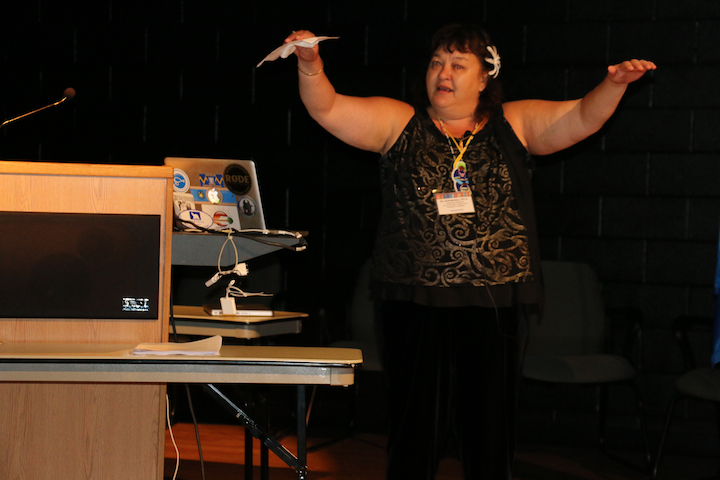 Dr. Ku Kahakalau brought the audience to their feet with rousing cheers of approval for her wisdom, wit, and enthusiasm.

The wildly popular Ku Kahakalau taught us the importance of Native Hawai’ian proverbs and their importance to the basic methods and principles of Indigenous research, and then led a round-table discussion on language to boot! “Superman” Ed Galindo led another round-table session on the new ISTEM program at Idaho, one that was attended by team leaders as well as NSF program officers. 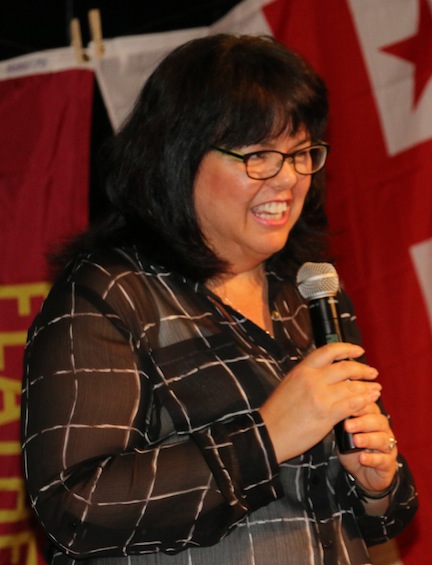 Other keynote speakers included recent Guggenheim awardee Dr. Joseph Gone, Algonquin Anishinaabe Dr. Lynn Gehl whose methodology article flew off the table like hotcakes, and dignitaries such as Peirce Hammond, Former Acting Director of the Office of Indian Education in the U.S. Department of Education and Dr. Jody Chase of the National Science Foundation. Scheduled keynote presenter Frank Finley wasn’t able to make his address due to scheduling problems (concurrent sessions were new this year and posed a few unforeseen problems), but he’ll be recording his presentation so you can find it later on this webpage. Be sure to watch for it!

Left: Lori Lambert (at the podium) introduces the SKC team that made the meeting happen. Center: Frank Finley waits with his typical good humor for the chance to present a keynote that will be online only. (Watch for it!) Right: The poster sessions were engaging and well-attended. Here Mayan (K’iche’ ancestry) student Daniel Hernandez explains his work to a meeting attendee. 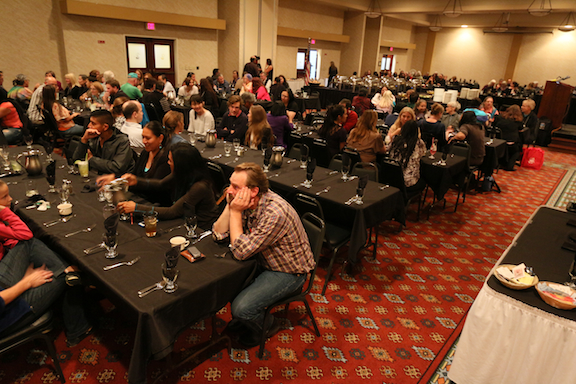 Friday night’s banquet at the KwaTuqNuk was a highlight of the event.

The meeting was organized most ably by Lori Lambert and her fantastic SKC team: Co Carew, Carol Baldwin, Mary Big Bow, Frank Finley, Virgil Braverock, and Regina Sievert (who organized the poster sessions!). Frank Tyro took photographs (all but one of the ones you see on this page) and videotaped the sessions, with additional videotaping performed by Roy Bigcrane on Saturday. Dr. Tod Shockey analyzed the evaluations from 2013 and will do the same for 2014. Everyone on the SKC team is especially grateful for the unsung hard work of Hayward Coe, Grants Manager, SKC, and of Mike Bigcrane and his maintenance crew. 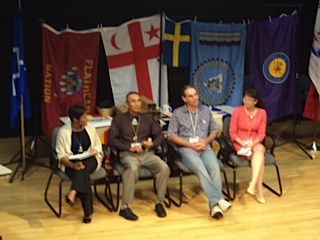 Student Storytellers Indigenizing the Academy, or SSITA, is the graduate student group of AIRA. Here four leaders in the group prepare to present their joint paper to the meeting. Left to right: Jess Venable, Frank Sage, Jimi Del Duca, and Brandy Ann Sato. There are now nearly 80 graduate students in SSITA. Check them out if you want to learn more about joining. Photo provided by SSITA.

Fantastic meals served on the SKC campus included full breakfasts, lunches, and snacks prepared by Cheri’s Kitchen, Cheri Houle owner. The banquet Friday night at the KwaTaqNuk Resort was prepared and organized by the hotel’s Event staff and proved to be a welcomed addition to the meeting agenda.

We want to give a big shout-out to the funders who made this wonderful meeting possible! Funding provided by Montana State University INBRE Foundation (a program supported by National Institutes of Health);  Salish Kootenai College Social Work Department; and EPSCoR Alaska allowed the meeting participants to register free of charge. We especially thank Emily Salois, MSW, and Dr. Allen Harmsen and Dr. Ann Bertagnolli of INBRE for providing the major funds that allowed this conference to happen. Finally, a special thanks to “Superman” Ed Galindo for all his help in securing funds for this meeting. 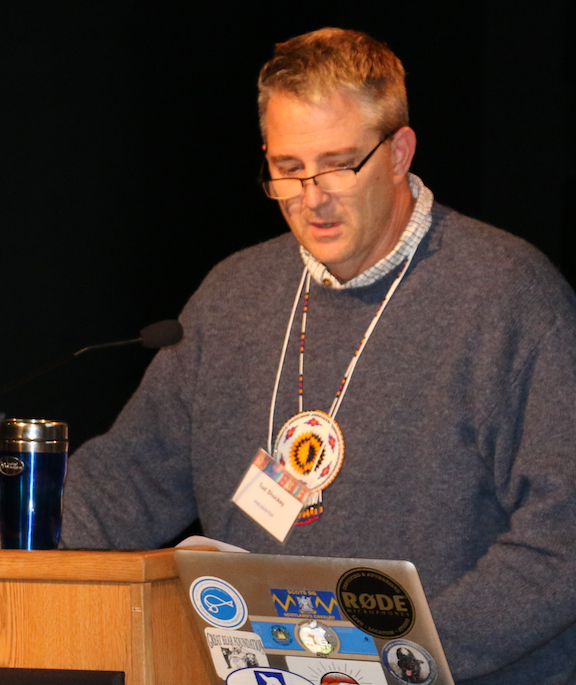 “I can’t believe I missed this meeting!” cried Tod Shockey when he read and analyzed the assessments from the 2013 conference. Take Tod’s tip and watch for registration to open next spring for the 2015 meeting so you don’t miss out!

Tod Shockey told us at the meeting’s close about the experience he had while analyzing the data from assessments of the 2013 meeting last year. Over and over, he said, he read the comments about how life-changing the meeting had been and groaned to himself aloud: “I can’t believe I missed this meeting!” Be sure you don’t miss out next year! Watch the 2015 meeting page for announcements as we sign up plenary speakers and start preparing for yet another unique event that is life-affirming, career-enhancing, and “coming home to myself at last!” 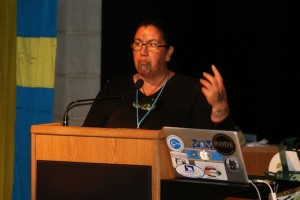 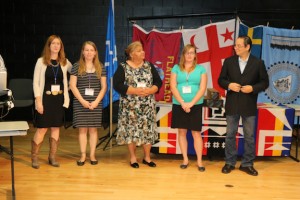 A collaborative group of graduate students and community members presented with Dr. Ron Trosper from the University of Arizona. Such collaborations were one of the most powerful things about the groups presenting at the meeting.

The meeting closed with a round dance and many hugs. Celebrations of life, unity, solidarity, and joy continued in small groups Saturday evening as people went out to dinner to share one last story, ask one more question, tell one more thing about a research project, and take a lingering last drink at the source of inspiration that is the American Indigenous Research Association annual meeting.

Remember you can join AIRA at no charge, just by filling out and submitting the form on this page. 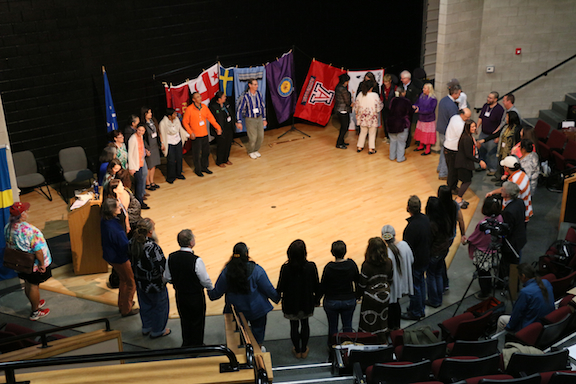 Where it ended: The closing round dance!

Remembering where it began: The opening address by SKC President Robert DePoe, next to a small sea of tribal and other flags representing some of the participants. When you come next year: BRING YOUR FLAG!